I was as pleased as the next person to see that young Frenchan Christophe Lemaître became the first white man to legally run under 10 seconds for the 100m. I find it interesting when there are cultural outliers in sport, but I try not to give too much credence to such things.

Hopefully this distinction can finally be laid to bed and Lemaître can get on with the rest of his career without having to carry a burden on his shoulders that has seemingly got in the way of previous talented white sprinters progressing.

Before today, there had been 446 legal sub-10-second performances in the men’s 100m; all of them achieved by 69 different sprinters of African-Caribbean descent and one of Aborigine descent. Lemaître has become the 62nd fastest athlete of all time with his performance of 9.98 at the French Championships.

It’s not racist to acknowledge the difference between the number of African-Caribbean sprinters and white sprinters to run sub-10 seconds for 100m. Racism is discriminatory or abusive behaviour towards members of a particular race. Realising that athletes of African-Caribbean descent have historically been more successful in the 100m is simply being observant, and we shouldn’t be afraid of noticing that.

People took note when Tiger Woods broke out onto the international golfing scene because very few black golf players had reached such a high level in that sport before. The Williams sisters also garnered a lot of attention when they first made an impact in the tennis world as it had mainly been a sport in which many white people had previously succeeded.

What we should be afraid of, however, is getting carried away with such accolades and recognising them as an athlete’s greatest achievement. Winning a medal at a global championships or setting a world record should far outweigh any arbitrary achievement. I’m sure Dieter Bauman values his 1992 Olympic gold medal more than his achievement of being one of the fastest white men over 5000m.

It begs the question – does Lemaître have the potential to become an Olympic champion? While it’s impossible to predict who will win gold at future championships (especially while Usain Bolt is still around!), we can compare Lemaître’s times to what other sprinters ran at the same age, in their first year of being a senior.

Jamaica’s Yohan Blake, who is one year older than Lemaître, last year clocked 9.93 seconds for 100m to set a world age-19 best. Before that Nigeria’s Seun Ogunkoya possessed the fastest time by a 19-year-old with 9.97. After that, Lemaître is the next fastest with his 9.98, closely followed by Samuel Francis (9.99) and Carl Lewis (10.00). 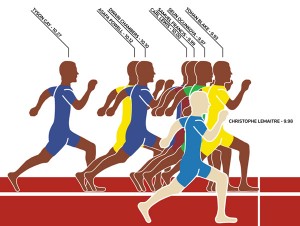 Put simply, Lemaître is the third fastest sprinter ever at age 19/20. Faster than Carl Lewis, faster than Dwain Chambers, and significantly faster than what former world record-holder Asafa Powell and former double world champion Tyson Gay achieved at that age. See the diagram on the right for a visual indication of how Lemaître compares to other sprinters at age 20. (In case you’re wondering, Usain Bolt didn’t attempt the 100m until he was 21 years old; it was a 10.03 clocking).

On pure potential alone, Lemaître could become one of the greatest sprinters ever. Of course he could fade away and never again improve on his PB, but all the signs are pointing towards him having a pretty successful career. What I like about Lemaître is that he is looking beyond being the first white guy under 10 seconds and wants to achieve tangible success – namely championship medals.

Lemaître is still some way from being the next Usain Bolt, but he is already well on his way to being an accomplished elite sprinter. Similarly, we should also have just as much anticipation for the future achievements of the likes of Yohan Blake, Ryan Bailey, D’Angelo Cherry, Ramil Guliyev and all the other talented young sprinters emerging right now, regardless of their skin colour.

Tiger Woods went beyond simply being ‘the best black golfer’ and became arguably the greatest ever in his sport. The Williams sisters didn’t stop at being the best ever black tennis players; they transformed the game and have now secured their place in the tennis hall of fame. Now that Lemaître has this sub-10 clocking to his name, he (and we) can move on from him being ‘the fastest ever white man’ and look forward to him potentially becoming one of the greatest sprinters, period.

In a couple of decades’ time, we could be looking back on what Lemaître has accomplished during his career; recalling a handful of championship medals (some gold maybe), a European record, and then somewhere towards the end there will be a recollection of: “oh, and remember that time when he first broke 10 seconds?” If that were to become the defining moment of his career, it would quite simply be a travesty.