This isn’t a normal retrospective piece about the 2013 athletics year. I’m not simply listing the highest-achieving athletes of the year or the top 10 performances. Instead, these are my personal favourite moments of the year.

And for a bit of balance, I’ve also listed five disappointments. They’re not intended to be critical of anyone in any way; they’re simply a small handful of unfortunate moments when I really sympathised with the athletes.

But first, in reverse order…

My 10 favourite athletics moments of 2013

More than any nation, Britain knows how difficult it can be for teenage sprint prodigies to make it on the senior level. But in a year when some of the country’s top young talents have left athletics to pursue other sports, Adam Gemili bucked the trend with his stunning breakthrough in the 200m.

Until this year it was considered his secondary event, but his focus on the longer sprint paid off. At the World Championships in Moscow he set a European age-19 best of 19.98 in the semi-finals, becoming just the second Briton in history to break 20 seconds, and then finished fifth in the final, just 0.04 away from a medal.

Some people are just born winners. People like Brittney Reese.

She went to the World Championships this year having won the past five global titles. Although she’d had a few blips during the season, Reese is not the kind of athlete you write off.

But then in qualifying she had a disaster. With the top 12 progressing to the final, Reese jumped just 6.57m. It put her in equal 12th place with Funmi Jimoh, her US team-mate. Jimoh was one of the last to jump; an improvement of just one centimetre would bump defending champion Reese out of the final. Thankfully for Reese, Jimoh did not improve.

In the final, Reese appeared a completely different athlete and in round two she sailed out to 7.01m. Job done, another gold in the bag.

When it was announced that the US city of Portland would be taking on Britain’s second city Birmingham in the race to host the 2016 IAAF World Indoor Championships, I was torn.

Birmingham is my home city and, having attended two major indoor championships held there over the past decade, I knew they’d do a good job of hosting it. But at the same time, I’d love to see more major athletics events staged in the US as the sport really struggles over there in terms of media coverage and popularity.

So when it was announced that Portland had been awarded the 2016 edition and Birmingham the 2018 event, I was delighted with the outcome.

Before this year’s World Championships, German javelin thrower Christina Obergfoll had finished in the top five at nine successive major championships. An incredible record in and of itself, but none of those top-five placings had been gold medal-winning performances.

Some began to wonder if she would ever win a major title. Others wrote her off straight away, simply by the virtue of all of her past near-misses. But Moscow proved to be tenth time lucky for Obergfoll.

Her second-round throw of 69.05m blew the competition apart and landed her a long-awaited gold medal. For good measure, statistically speaking it was the most dominant performance of the entire championships.

As the summer season drew to a close, it looked as though – for the first time since the IAAF began ratifying official world records more than 100 years ago – there would be no world records set outdoors in standard athletics events.

Thankfully, Kenya’s Wilson Kipsang ensured that would not be the case. Competing over the most classic of all athletics distances, Kipsang’s incredible 2:03:23 run at the Berlin Marathon took 15 seconds off the previous world record for the event.

5 Brianna Rollins’ US record in the 100m hurdles

Pound for pound, Brianna Rollins is the athlete of the year as far as I’m concerned. Little more than 12 months ago, only the keenest observers of the sport had even heard of her. Now, she is one of the biggest stars in the sport.

The manner in which she won the world title was incredible. Drawn in the lane against defending champion Sally Pearson, Rollins got left in the blocks while Pearson blasted into the lead. Despite it being her first major championships, Rollins kept her composure and clawed back the deficit to win in 12.44.

But her standout performance of the year was her US record of 12.26 at the US Championships. Watch the slow-mo video above. Pretty much as close to hurdling perfection as you can get.

Much like Rollins, Bondarenko wasn’t exactly a big name before this year. But now everyone in athletics knows all about the gangly Ukrainian high jumper.

After a few early-season victories, Bondarenko’s biggest breakthrough came at the Diamond League meeting in Lausanne. He already had the competition won at 2.39m, adding three centimetres to his PB. He wasn’t quite done though and moved the bar up to 2.41m. At the third time of asking, he sailed over it with room to spare, going to equal third on the world all-time list.

He went on to attempt the world record several times throughout the season, some of them coming very close, and he equalled his 2.41m national record at the World Championships in Moscow.

For a while it looked as though the heptathlon at the World Championships would be a bit of a damp squib as five of the top-six finishers from last year’s Olympics were not going to be there for one reason or another.

But in terms of pure competition, it turned out to be one of the best of the championships.

Positions changed after each discipline and by the time of the final event, the 800m, there were six women in genuine contention of winning a medal. However, a couple of those – including Dafne Schippers of the Netherlands – were still considered to be outside contenders.

Schippers didn’t think that, though. In her head, she was going to get a medal – and she did exactly that. The 21-year-old smashed her 800m by an incredible seven seconds, adding more than 100 points to her heptathlon PB and sneaking into third place overall to take bronze by just 15 points.

2 Ryan Wilson’s 110m hurdles victory at the US Championships

Everyone loves an underdog. Especially one who has bags of talent, has been among the world’s best for a decade, and is a downright good person.

Ryan Wilson has had his fair share of near-misses over the years. Competing in a country where only the top three at the national championships earn major championships selection, numerous untimely injuries had prevented Wilson from representing the USA internationally.

To rub salt in the wounds, he has twice finished in the top three at the US Champs – but both occasions were years when there were no major championships, 2006 and 2010.

But that all changed this year. Not only did Wilson make the team, but he did it in style by winning the national title. Determined not to let the rare opportunity slip by, Wilson capped his memorable season by earning the silver medal at the World Championships. Good things come to those who wait.

The video says it all. So does this picture: 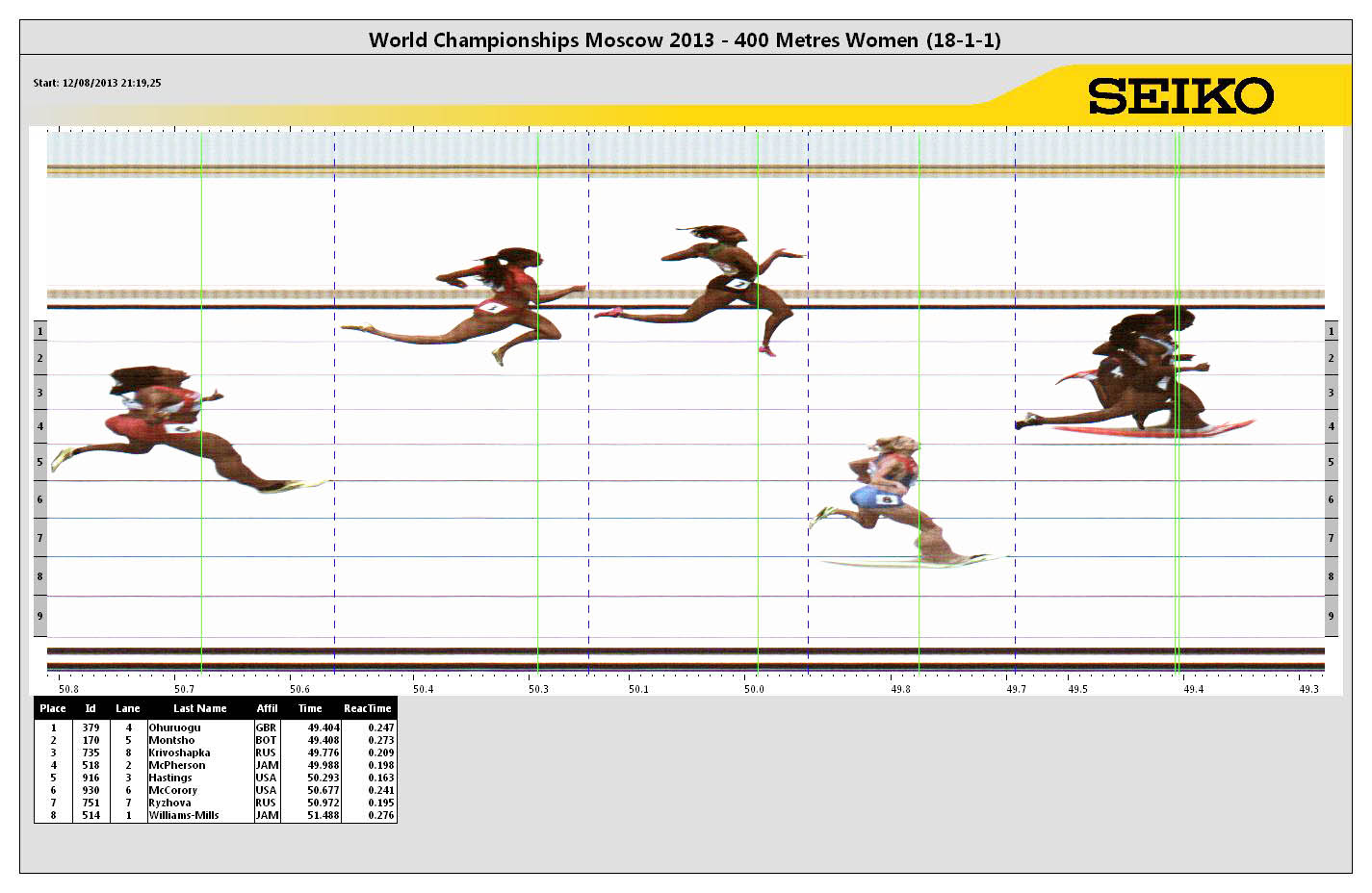 Kenya’s Paul Kipsiele Koech has been one of the world’s best steeplechasers for the past decade, but he rarely qualifies for the national team because the Kenyan trials are often held at altitude and Kipsiele Koech really struggles in such conditions. But this year he made it to the World Championships by virtue of the wildcard given to 2012 Diamond Race winners.

His last World Championships appearance was in 2009 when she finished fourth. This was a rare opportunity to improve on that, but sadly the 32-year-old was pipped to the podium in Moscow and once again finished fourth.

One-lap hurdler Perri Shakes-Drayton was one of the poster girls of last year’s Olympics. An up-and-coming talent who grew up within walking distance of the Olympic stadium, she was devastated when hamstring problems prevented her from making the Olympic final.

This year, she looked a much stronger athlete. At the start of the year she won the European indoor 400m title, then in the summer she improved her 400m hurdles PB to 53.67, making her the second-fastest entrant at the World Championships. Her comfortable wins in the heats and semi-finals cemented her status as a medal favourite.

But once again she was dealt an untimely injury blow in the final after her knee crashed into one of the hurdles and she trailed home in seventh.

She has now made the decision to drop the hurdles in favour of the 400m flat and I’m really looking forward to seeing how fast she can go next year.

I really thought he was going to do it. For a brief moment during the World Championships final in Moscow, Kenya’s Julius Yego was in a medal position.

Yes – a Kenyan in the javelin final. Not just in the final, but in contention for a medal. To put that in perspective, before this year’s World Championships, the best result by a Kenyan athlete in a field event in the history of the championships was 15th in qualifying.

Yego had smashed his own national record by more than three metres in the fifth round and it looked as though he was set to win a historic medal.

But then home favourite Dmitriy Tarabin, with his last throw of the competition, overtook Yego by just 82cm to bump Yego out of the medals. Yego was devastated, as was I, but he can hold his head up high his fourth-place finish; higher than any Kenyan man finished in the marathon.

There probably aren’t too many people who were overly fussed by Sofia Assefa’s second-place finish in the steeplechase at the Diamond League final in Brussels. Even Assefa herself probably wasn’t too bothered. But I cared.

The reason being that I’d put a few quid on an accumulator. Seven other athletes I’d backed in Brussels had all won and all I needed was Assefa to win to land me a few hundred pounds.

Everything was more difficult in the old days, so they say. Apart from pole vaulting, that is. A slight change in the specification of the pegs that hold the bar in place several years ago has made pole vaulting more tricky.

So at this year’s European Indoor Championships when Renaud Lavillenie attempted to clear 6.07m – a height that only the legendary Sergey Bubka has bettered (back in the day when pole vaulting was ‘easier’) – it was kind of a big deal.

With the competition already won, Lavillenie nailed the 6.07m height on his third attempt. Or at least he thought he had. He immediately started celebrating, but the pole vault official was doing anything but. With his red flag in the air, the official had spotted that the bar – after being brushed by Lavillenie as he went over – had landed on the wrong part of the uprights, deeming it a foul.

After a few teary moments sat on the floor, Lavillenie got back on his feet and celebrated his third successive European indoor victory.