In the weeks before heading to Rio, part of me feared that I wouldn’t return from there alive.

I knew better than to read too much into the negative headlines ahead of the Games; after all, when had there ever been a string of positive press leading into an Olympics? And I’m usually a pretty optimistic person. But I couldn’t get rid of this nagging feeling that something bad was going to happen in Rio.

I needn’t have worried.

Yes, there were issues. And no, it wasn’t the best Games in history. But with the dust having now settled on the 2016 Games, looking back at some of the Olympic-related news stories from one, two, or even 12 months ago offers some light relief.

In this series of blog posts, though, I’m not going to dwell on the stories that made headlines before, during or after the Games. I’m simply going to reflect on my own experience in Rio – for my own sake more than anything, so that I don’t forget it – and hopefully it might show a side of the 2016 Olympics that not everyone was able to experience.

I had been in Brazil for just a matter of minutes before getting to experience a Rio taxi.

“I’m right,” I thought to myself as the driver – who was engaged in a whatsapp conversation for the duration of the one-hour journey – weaved in and out of traffic at what felt like 100 miles per hour. “I really am going to die in Rio.”

He went so fast over one speed bump, I’m pretty certain we got more airtime than Jazmin Sawyers did on her second-round jump in the Olympic long jump final. 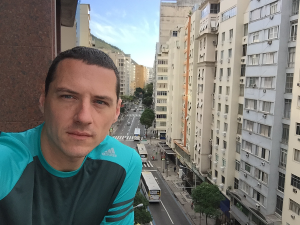 View from my hotel balcony

The driver initially dropped us off at completely the wrong address, but we finally reached our destination in one piece. Just enough time for a quick meal at a restaurant next door, which was an all-you-can-eat buffet whereby the price is determined by the weight of your meal. (Obviously my dessert cost more than my main dish.)

During the meal, my colleagues – who had arrived a few hours earlier – told us that we had just missed a protest taking place right outside our hotel, in which some crazy lady had kicked over all the bins along the street.

My inner eternal optimist told myself that she must have simply been warming up for the tae-kwon-do.

Everyone else on our team was able to validate their accreditation at the airport. When I tried, though, the computer said ‘no’, so I had to go to the main press centre (MPC) the following day to validate it there.

They appeared to validate it without any problem, until I had to use it for the first time to get through the MPC security. The volunteers scanned it, their computer screen turned red and up flashed the words: “acesso negado” – which, even in my limited Portuguese, I could figure out the meaning of.

A volunteer from the accreditation centre had a word with security to let them know I wasn’t some lunatic, and they eventually let me in. But then my dodgy accreditation wasn’t allowing me to access the Rio 2016 internet system.

Now, you can deny me access to the Olympics. But no one – no one – takes away my internet. (No way was I going to pay the South American data roaming charges.)

Thankfully I managed to bump into one of the managers at the MPC and she sorted me out with a new accreditation; one that worked.

I finally felt ready for the Games.

The day before the athletics got under way, I did two extremely important things:
– Check out the Olympic Stadium
– Have my picture taken next to the Olympic rings

Both are pre-requisites when attending an Olympic Games.

In the morning I went for a run along Copacabana (after taking the aforementioned photo with the rings). I’d never seen so many active people out and about before. The path along the beach was full of runners, cyclists and skateboarders. There were mini gym stations every few hundred metres, all of which were being used. Yoga classes were taking place on the beach. Surfers were in the sea.

This is a city that clearly loves sport. It’s just a shame that wasn’t always reflected in the stands at the various competition venues.

We headed to the stadium in the afternoon and it all started to feel very real. One more sleep.