10 stories to watch unfold at the 2013 World Championships

Over the next few weeks, athletics websites will be flooded with preview material for the IAAF World Championships in Moscow.

But there are only so many previews you can read before realising that they’re all pretty much outlining the same medal contenders and predicting who will win what.

So going beyond simply talking about the top athletes in each event, I’ve tried to look ahead at what might be some of the more interesting stories that will unfold in the Russian capital. 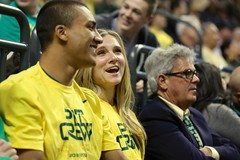 Olympic champion and World record-holder Ashton Eaton will be the big favourite to take the Decathlon title in Moscow. But his wife Brianne Theisen is looking more and more like a medal contender in the Heptathlon following the recent withdrawals of reigning champion Tatyana Chernova and Olympic champion Jessica Ennis.

They aren’t the only married couple going for gold either. Russians Maria Abakumova and husband Dmitri Tarabin both lead this year’s world lists in the Javelin. Also on the host nation’s team are husband-and-wife race walking duo Sergey Kirdyapkin and Anisya Kirdyapkina.

Double gold for a married couple in front of a home crowd – it has the makings of a Hollywood movie. Well, maybe a low-budget straight-to-DVD movie…

2. Keeping it in the family 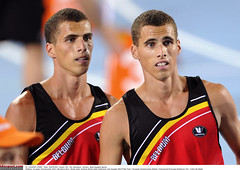 Sticking with the family theme, there will be siblings-a-plenty in Moscow. In fact, in the race-walking events alone there are three sets of twins! Joao and Sergio Vieira will represent Portugal in the men’s 20km walk, Chile’s Edward and Yerko Araya will contest the 50km and 20km walks respectively, and Kazakh twins Ayman and Sholpan Kozhakhmetova will both compete in the women’s 20km walk.

Perhaps the most famous twins in athletics are the Belgian 400m brothers, Jonathan and Kevin Borlee. In the 4x400m they will be joined by younger brother Dylan – the first time ever at the World Championships that three brothers have all contested the same event.

Other twins in Moscow include Slovak jumpers Jana and Dana Veldakova, and Jake and Zane Robertson, distance runners from New Zealand. There are many other sets of siblings set to compete there too. Olympic pole vault champion Renaud Lavillenie is joined on the team by younger brother Valentin, while sisters Tirunesh and Genzebe Dibaba are some of Ethiopia’s best hopes for a medal in the distance events.

Unusually, sisters Mimi and Almensh Belete will both be in Moscow but representing different countries. The former Ethiopians have switched allegiance with Mimi now representing Bahrain and Belete running for Belgium.

There are also sprint hurdlers Shermaine and Danielle Williams from Jamaica and Thomas and Pascal Martinot-Lagarde from France. Meanwhile Christine Ohuruogu was named in the British 4x400m squad alongside younger sister Victoria.

Race walker Jared Tallent was selected for the Australian team along with sister Rachel. Also in the race walking events are Swiss duo Marie and Laura Polli. In fact, more than a third of the Swiss women’s athletics team is made up of siblings. Aurelie and Fanette Humair go in the 4x100m along with Lea Sprunger, whose sister Ellen will compete in the heptathlon. 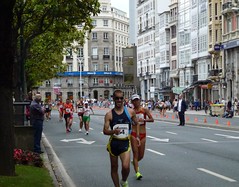 One athlete in Moscow will be more accustomed to the World Championships than any other. Spanish race walker Jesus Angel Garcia will be making his 11th appearance at the event – an outright record for a male athlete and tying the tally set by Portuguese race walker Susana Feitor.

Winner of the world title back in 1993, the 43-year-old will be the oldest athlete competing in Moscow. 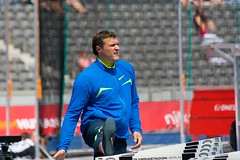 On the subject of veterans, there are a number of athletes still going strong into their late thirties and early forties.

Similarly, if USA’s Bernard Lagat, 38, finishes in the top three in the 5000m, he would become the oldest ever medallist in a track event at the World Championships, while German pole vaulter Bjorn Otto, 35, is tipped to become the oldest man to step on to the podium in that event. And if Japanese hammer thrower Koji Murofushi successfully defends his title, at 38 years old he would be the oldest ever winner of a men’s field event.

At the opposite end of the age spectrum, Kenyan 18-year-old Conseslus Kipruto could become the youngest ever winner of the 3000m steeplechase and the second-youngest winner of a men’s event in the history of the World Championships. If Arman Hall wins gold as part of the US 4x400m team, he would be the youngest ever world champion in that event.

Other athletes who stand a chance of becoming the youngest ever medallists in their respective events are British relay runner Dina Asher-Smith, Belgian heptathlete Nafissatou Thiam and 1500m runners Faith Kipyegon from Kenya and Mary Cain from the US. 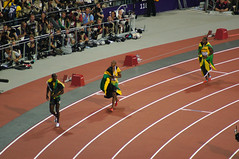 The introduction of wildcard entries for Diamond Race winners has led to more countries than ever before fielding four athletes in some events. It means the likelihood of a 1-2-3-4 sweep by a single nation – while still a difficult feat to accomplish – is slightly more likely.

It has only been achieved twice before at the World Championships, both times in 2005. USA filled the top four places in the men’s 200m, while Ethiopia did likewise in the women’s 5000m.

Without listing all the events that will have four representatives from one nation, the discplines that stand the best chance of witnessing a 1-2-3-4 finish include the men’s 200m (Jamaica), the men’s 3000m steeplechase (Kenya), the men’s and women’s marathons (both Kenya and Ethiopia), the men’s 110m hurdles (USA) and the women’s 100m hurdles (USA). 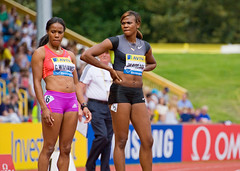 The Nigerian has developed a habit of causing upsets. Twice this year she has defeated double Olympic 100m champion Shelly-Ann Fraser-Pryce, once in the 100m and once in the 200m. Meanwhile in the long jump she handed two-time world champion Brittney Reese a rare defeat.

8. This is his moment

Kenya’s Paul Kipsiele Koech has been among the world’s best in the 3000m steeplechase for the best part of 13 years. Owner of the third-fastest performance in history, over the past decade he has broken the eight-minute barrier on nine occasions. But despite ranking near the top of the world lists each season, he has only made it on to the Kenyan team three times.

His problem? He struggles to run at altitude. Weird, I know – especially for a Kenyan. But unfortunately for him, the Kenyan Trials each year are held at altitude. It means that each year he will perform well at sea-level on the European circuit, but is never a factor when it comes to trying to make the national team.

Fortunately for him, the IAAF introduced wildcard entries for Diamond Race winners. Having won the 2012 Diamond Race in his event, Kipsiele Koech will have the opportunity to win a long-awaited gold medal at a major championships.

US high jumper Chaunte Lowe is another 2012 Diamond Race winner with a wildcard entry. Her place on the team was confirmed as recently as last week when USATF sent out their team release. There’s only one problem – she is heavily pregnant and just days away from her due date.

Something tells me she won’t be in Moscow. 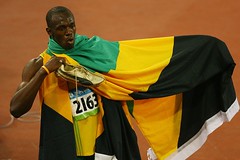 Win, lose or false start, Usain Bolt is bound to dominate the headlines in Moscow. He may not be in world record shape, but he could be set to equal the record for the most World Championships medals won by a male athlete.

The legendary Carl Lewis currently has the highest medal tally with 10, but Bolt has a total of seven. As the favourite to take gold – or at the very least a medal of any colour – in the 100m, 200m and 4x100m, the Jamaican superstar looks destined to equal Lewis’s record.

The evergreen Merlene Ottey holds the outright record for most World Championships medals with 14. Her record will be safe for at least another two years, but USA’s Allyson Felix could get within one medal of Ottey’s tally, should she take medals in the 200m, 4x100m and 4x400m.

NB – This is my first blog post in quite a while. There are a few reasons why I hadn’t blogged in a while – the main one being that I returned to the world of athletics journalism a few years ago, meaning most things I wrote were published on other websites. I also became a parent 18 months ago, which – while being the greatest joy of my life – means I have even less spare time than ever before. But occasionally I get an idea, the inclination and a spare few minutes to put together a blog post, so here it is. Enjoy!